Getcontact, the leading mobile app for identifying unknown callers, is proud to announce the launch of its new TV advertising campaign in Indonesia.

The commercial, released on all Indonesian national TV channels on March 4, 2021, is based on the company’s slogan: “Know Who Is Calling Before You Say Hello.” This innovative approach to caller identification will help Indonesians protect their privacy and avoid spam and scam calls.

For this campaign, Getcontact worked with BBDO Indonesia, a leading global agency. The main character was played by famous comedian and presenter Gita Bhebhita. The commercial has become a wide-ranging campaign supported by influencer collaborations, performance marketing and different creative assets for each social media channel.

Know Who Is Calling Before You Say Hello

The commercial takes place in the living room of an Indonesian family. It starts with a mother receiving a phone call. After she picks up the phone, a fraudster says that her child was involved in a car accident and that she needs to send money for hospital expenses.

Since she has the Getcontact app, she knows the caller is a scammer – and this is where the fun begins. The mother starts laughing at the fraudster, saying, “Nevermind, I have one more child!” The hashtag of the campaign is #KetahuiSiapaSebelumSapa, which means ‘know who is calling before you say hello.’

The main goal of the advertising campaign was to introduce the “Caller ID” feature of the Getcontact application in a humorous way. Overall, the campaign was a great success in raising awareness of Getcontact and its features.

The commercial, including TV and digital views, reached people more than 500 million times. It was well-received by the public and generated a lot of excitement. The ad contains sarcastic and cynical elements, while the story addresses a common type of fraud that can happen to anyone in Indonesia – which is why people can empathize.

Even though the campaign addresses a serious issue, it still manages to be lighthearted and entertaining. This combination of humor and seriousness makes the ad very effective. By creatively addressing a relatable problem, the ad will stay with viewers long after they have finished watching it.

The ad was a big hit on social media, in particular. It went viral on TikTok, with over 14,000 videos posted – and it also received much attention on Instagram, Facebook and Twitter.

Getcontact’s first TV commercial was recently awarded first place in the Viral and Cultural subcategories of the ‘Video’ category at the MUSE Creative Awards 2022. 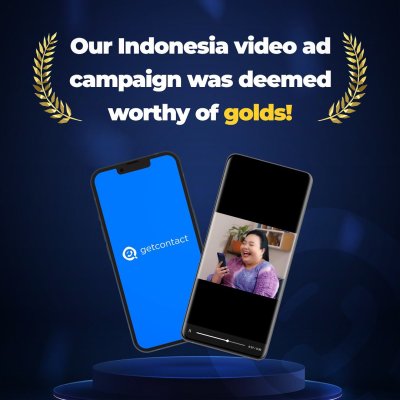 What is Getcontact and How Does It Protect You from Phone Scammers?

We’re in the midst of a global problem that’s shown a huge increase in recent years: spam calls. They are a daily problem of this modern age. The problem begins when our phone rings and we see an unknown number flash up on the screen. We answer the phone wondering who’s calling and whether...

Smartphones are an essential personal communication tool that we use every day to connect ourselves to the rest of the world. Unfortunately, mobile scammers are all too keen to take advantage of smartphone usage. In Russia alone, $300 million is stolen annually by scammers from cell phone users’...

The Lives We Touch Series: Part 1

The Lives We Touch Series #1 “It was the bank's own phone number, I couldn't understand.” “They said if I would not pay, they would cut off the power. So, I panicked.” “He said he was a prosecutor, I got scared and believed him”... You may have often heard such words...

What is a Spam Call?

One of the most common problems mobile phone users experience is incoming calls from unknown numbers and unwanted calls. The number of spam calls has increased substantially in recent years, partly due to web-based technologies enabling an SMS or call to reach thousands of people simultaneously at...

You can do a caller ID lookup quickly and easily from your computer with Getcontact Web, ensuring that you know the identity of whomever you’re communicating with. How many times have you seen a missed call from someone who isn’t in your contacts and wondered “Who called me from this...

Getcontact’s newest market is Turkey, a country with one of the highest spam call counts in the world. Already recognized globally as one of the most successful spam call blocking apps, Getcontact entered the Turkey market with a strong TV commercial. The advertisement, created by global brand...

How Spam Calls Have Changed During The Pandemic Period?

While many people are doing their best to help others amid the coronavirus crisis, some unscrupulous opportunists are out to take advantage wherever they can. That said, phone frauds and scam calls are increasing day by day. Perhaps you’re quite savvy about scam calls already and are always...

The Lives We Touched Series #2

If you’re relatively tech-savvy, you might think you have a good level of protection against financial scams and other malicious activity. However, phone scammers can have a different method for everyone. The reality is that we’re all just one call away from scammers and unwanted callers. And...

Find all the features you need to stay organized, stay in contact with your network, and maintain your privacy with the Getcontact app. Sarah is always busy running her own business. Her cell phone is ringing off the hook all day long. She is constantly flying across the country to meet with...